The Cas9 protein found in type II CRISPR (Clustered Regularly Interspaced Short Palindromic Repeats) loci for bacterial adaptive immunity has been repurposed as an easy-to-engineer molecular tool for genome engineering. In the engineered system Cas9 is guided to specific DNA sequences by a so-called “single guide RNA” (sgRNA). The sgRNA can be re-programmed to target almost any sequence. Therefore only two components, Cas9 and an sgRNA, are required for RNA-guided Cas9-mediated genome engineering. Multiplex editing can be achieved by delivering multiple sgRNAs for different targets to the same cell.

Cas9 contains nuclease activity and induces double-strand breaks. In 2012 and 2013  several laboratories demonstrated that a nuclear-targeted cas9, co-expressed in eukaryotic cells with a sgRNA designed to an endogenous target could create a double-strand break at a pre-determined target. The breaks were repaired by the cells’ own DNA repair mechanisms. Since these mechanisms are sometimes imperfect, this resulted in small mutations at user-defined sites.

At TSL we use TypeII restriction enzymes to rapidly assemble multigene binary vectors containing a Cas9 cassette, one or more sgRNAs and (usually) a plant selectable marker cassette. When delivered to plants, these create double-strand breaks at the target. Please read our guide on how to assemble plasmid vectors for Cas9-mediated double-strand break induction in plant genomes.

Figure 1 – The cas9/sgRNA complex recognises and pairs to 20 bp of target sequence before the ‘NGG’ PAM motif. (from Belhaj et al 2013) 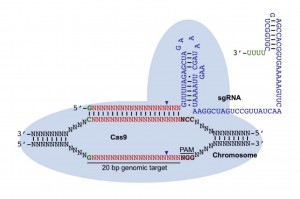